Back in January I took a Sportstest with Dr Garry Palmer to get some understanding of my physiology, my metabolic profile and some guidance on my training. The underlying themes of the test results were encouraging – I’m well suited to endurance sports – but there was a relatively wide discrepancy between what we saw in the lab and what I was seeing out on the road in the days that followed. My power, relative to heart rate, was quite a bit higher out in the wild, which challenged the integrity of the data. There was never any suggestion that the measurements were wrong or that the equipment was badly calibrated; I recorded the session using my own power meter and heart rate monitor and the recordings were a match to those of the Sportstest equipment.

“When you eliminate the impossible, whatever is left, however improbable, must be the truth.”

So what could have caused the discrepancy? Power output is a fairly absolute measure but heart rate is subject to a vast number of influences. Caffeine and other stimulants elevate heart rate. Fatigue and undernourishment can depress heart rate. Temperature can also have a fairly significant effect, as your heart works harder to pump blood around the body in search of cooling. The 21°C of the test lab is quite different to the sub-zero temps of a January ride in the UK. Stress, illness, mood, hydration, sleep quality, diet… the list of influencers is a long one. I’m tee-total, eating clean and avoiding caffeine. My weakest link is probably stress, but that’s a constant and the week of the test was nothing unusual. Approaching the test there was a glimmer of a throat infection – that warning sign of a grotty taste at the back of your mouth – but I rested well and thankfully it never developed into anything. On the morning I wolfed down my usual breakfast smoothie and was feeling fresh.

Dr Palmer and I spent time poring over the files from my training rides trying to identify the cause, but there was no obvious signal. The uncertainty was gnawing away at both of us so when Dr Palmer found himself in London with a window in his diary he offered the chance to run our tests again. This would give us a second set of data to compare with the first and hopefully uncover the mystery of the missing heartbeats. He took my body composition measurements again as I’d lost some weight since the first test two months earlier. I’d chunked back up in Japan and taken it off again once I got back but despite a net loss of 2.4kg only 1.3kg of that was fat. I’d lost 1.1kg of lean muscle at the same time. That’s far from ideal and suggests I was being a bit too aggressive with the diet. Pacing has never come naturally to me, in any form, and it’s good to be given a kick up the arse now before I’d done too much damage!
Onto the bike and back on with the mask. We ran a sub-maximal test first, but at a higher output than the previous test as that was a truer measure of my fitness. After five minutes at a sub-maximal intensity the power is slowly increased closer to my threshold and held there for another five minutes. After a few minutes of gentle pedalling it’s into the ramp test; the hurty bit. It felt a bit tougher than the test in January but I also didn’t have the grit of that first test and I felt like I caved too quickly today. The data suggests there wasn’t much in it though, with my heart rate topping out at 187bpm today against 190bpm last time.

“After a few minutes rest it’s into the ramp test: the hurty bit.”

Power was ever so fractionally down, but as I’d lost muscle mass we would expect to have lost more. Power-to-weight and VO2 Max are fractionally up and efficiency – the most important metric for the Transcontinental Race – is quite a bit better. Heart rates are about 5bpm lower for each zone, which corresponds much more closely to what I see out on the road. Some of those changes will be a result of the moderate amount of training I’ve done in the interim, but with the Japan trip and the injuries from the velodrome crash that’s not been a great volume. The difference was quite extreme though so we’re probably looking for an accumulation of small factors that conspired to throw the data.

So let’s go back to the assumptions we’d made and see if they stand up under tougher questioning. Given we’d eliminated most factors already, I revisited the warning signs I had of impending illness. Despite my feelings that I’d not been affected, that had now become the most likely cause of an elevated heart rate. Something in the new data backed that idea up too. My heart rate recovery after the first test was a bit below average. In isolation it didn’t stand out, but today’s recovery rate was dramatically different. That, combined with the efficiency measurements would suggest that I wasn’t in perfect health the day of the first test, regardless of my perceptions.

“We were probably looking for an accumulation of small factors that conspired to throw the data.”

Dr Palmer suggested I may have been fatigued or under-fuelled too. I resisted the suggestion as I’d rested well and eaten consistently. In fact, I’d been using MyFitnessPal to track every calorie since the start of the year. I confidently pulled up my calorie data from the day of the first test and it was immediately obvious to Dr Palmer that he’d found the second piece of the puzzle. Sure enough I’d been meticulously hitting my calorie targets, but those were based on MyFitnessPal’s formulas for the general public, hoping to lose some chub, and not an athlete training to hit peak race weight for an ultra-distance event. My net weight loss for the first two months wasn’t dramatic but it included a 2.5kg gain in Japan and then losing it again on my return, so at any given time I was losing close to 1kg a week, asking too much of my body and leading to chronic fatigue. 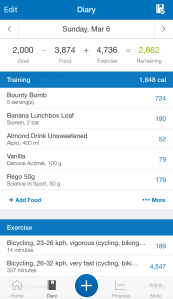 MyFitnessPal uses an allowance system that gives you your base calorie requirements and then adds in any calories you’ve burned that day through exercise, so on rest days I was consuming 2,000 calories. On training days I can burn anything from 1,000 to 8,000 extra calories, so my intake can fluctuate wildly. Dr Palmer highlighted the flaws of this method and as soon as he did I was kicking myself for not realising this sooner. My metabolism was taking a kicking from the variance and on rest days I was still under-fuelling, starving my body of the ability to adapt. My protein intake wasn’t high enough or frequent enough to maximise the recovery (or minimise the muscle loss). As I recovered from the whiplash injury my training volume dropped dramatically so my body also lacked the signals that it needed to preserve muscle, which is partly how I’ve managed to lose so much lean muscle. Instead of peaking and troughing through the week Dr Palmer calculated my calorie needs based on an average training week and explained how I should be maintaining a steady rhythm throughout the week.

Rather than 2,000 calories plus a percentage of what extra I was burning, I’d now be aiming for 3,200 calories per day. “Jammy bastard”, I hear you saying, but what looks like a great excuse for relaxing your diet is actually not what it seems. It means that during my long rides I need to reduce my fuel, training the body to burn even more fat. I can no longer justify gluttonous café stops on the marathon rides. Then during my rest days I need to eat even cleaner in order to hit my higher targets without letting in any of the bad stuff. The result should be more energy for better quality training and better gains during the recovery periods. I’ll let you know in a few weeks time.

You don’t need to be racing across continents to benefit from testing. If you’re a runner, cyclist or triathlete at any level you’ll learn valuable insights with a Sportstest and come away with a plan to improve, whatever your particular goals are.

2 thoughts on “The Process of Elimination”